Product Design
Product overview
Mobile App
Door Handle(mounted on the door)
Electronic Device (mounted on the wall)
About
The product lets people open any door, with any phone in a highly secure way through a digital key: LightPass. People can share a digital key with their employees, friends, or guests through the app, instead of delivering a key by hand. They can also define time restrictions for each person and manage their access.

My contributions
Aug 2018 — Jun 2020
As an only UX designer, I was in a vital role in achieving business goals while keeping the focus on the user. I brought the Human-centered design approach, facilitated Design Sprints, applied Design Thinking methodologies, supported UI designers to build up a design system. During the process, I collaborated with different development teams like backend, embedded, React Native, and frontend developers.

The illustration designed by attoma Berlin.
User & business goals
The user goal was to open a door quickly and intuitively; the business goal was to increase customer satisfaction, enhance the usability of the main feature of the app and gain more customers with the "easy open" function.
Challenge
Open any door, with any phone, is the main feature of the app. It should be accomplished by any user quickly and intuitively. However, with the technology we use, the user has to find the right digital key (called pass in the app), tap on the "Open" button, use the LightPass in front of the device to open any door. If the user has ten digital keys (passes), he/she has to scroll and search to find the right pass, which takes a lot of time. 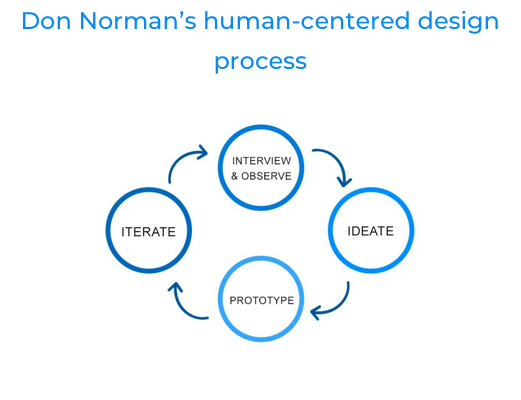 Activities
I follow Don Norman’s human-centered design process. There are four different activities in the process.

Testing the legacy app
Guerilla Usability Testing
I conducted a guerilla usability testing to gather user insights and identify the usability problems in the legacy app.
Task
1. The product installed to the door, lets you open any door with any phone in a highly secure way. Assume that you have an account and use the app. Can you try to figure out how would you open this door via the app?
Key findings
To do's

Legacy app
Task Analysis
First sketch
Task Analysis
First ideas
Sketches, wireframes
During idea exchange meetings with development teams, some of the team members suggested using Bluetooth or GPS technology. In that way, the app could figure out which LightPass to use for every door. So, as you can see the first early sketches above, the app shows only one pass, and the user doesn't have to look for the right pass. That was the best solution in terms of user experience: no pass hunting, no thinking, and no scrolling!

However, it was a time-consuming improvement; the development teams had many other priorities, and we didn't have enough sources. It was sad to postpone this idea to implement in the future.

The version in the middle was clear to have one big pass with a horizontal scroll. However, it was vital for us that finding the right pass shouldn't take much time. So, I kept looking for a better solution.
‍
In the end, it was good to consider other possibilities and know the limitations. So, at least, I learned that I have to keep the "Step 2" above on the Legacy App. My next focus was to find an intuitive way for pass selection as you see on the latest iterations. 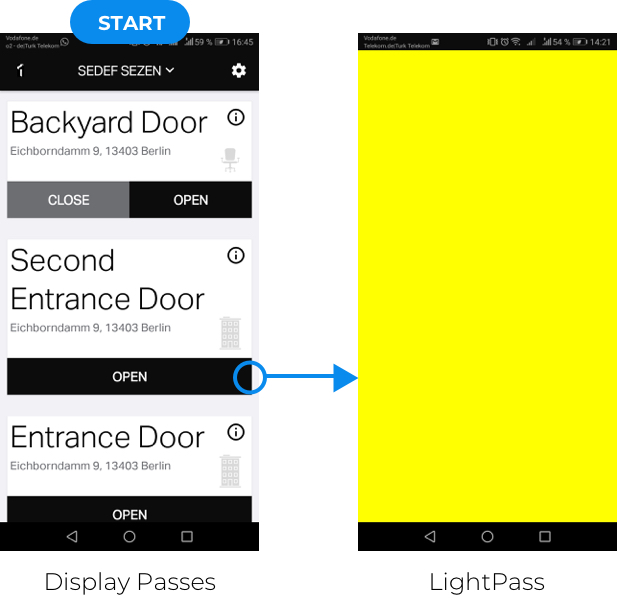 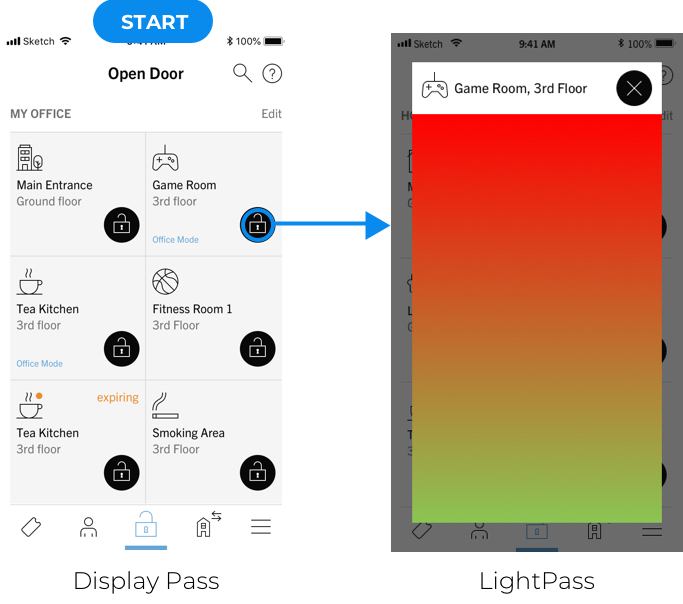 After
Task analysis
Final User Interface and Icons are designed by attoma Berlin.
Final solution
Wireframes, final UI
When I think about how we use the physical keys, we first put it in a place where we can easily find it. Secondly, we usually put a kind of label on it to distinguish from the other keys, or the shape of each key is already different, and we don't need any label. So, we quickly and easily get in when we arrive at the door. I came up with the idea which provides users as much as passes at first sight, and the passes should be customizable as the physical keys. So, they can display and distinguish each pass quickly.
Validate
Usability Testing (Target Group)

"It's clear that every card represents a different door."

The photos are taken by FSB Marketing Team.
Add a step by step guide
Sketches, Final UI
I had a shocking finding from the first user testing, as I mentioned in the key findings; most of the participants tried to use the LightPass in the wrong way! Instead of displaying the flashing lights in front of the device, they held the camera in front of the device like they're scanning a QR code. It was a crucial finding for us because door opening (the main feature of the app!) had to be the most natural interaction.
So, I added visual instructions that explain how to use the LightPass on the homepage.

Final User Interface and illustrations are designed by attoma Berlin.
Next steps
The next steps are to implement GPS technology to the app for filtering the passes based on the user's location, add guided tour for the users who download the app for the first time, gather customer feedback by performing analysis and tracking tools to the app and improve the user experience.

Ensure that users easily meet their needs in the application

Photo by NordWood Themes on Unsplash.
User & Business Goals
The user's goal was to intuitively navigate throughout the app, including finding the features they need; the business goal was to reduce customer frustration moreover adding the value of the user-friendliness of the products in sales and marketing.
Challenge
According to customer feedback stakeholders received, users have difficulties in discovering:

As I explain below, I validated the feedback in the first round of guerilla usability testing.

Testing the legacy app
Guerilla Usability Testing
In the first round guerilla usability testing, I gave other three tasks to the users to observe their interaction in the app:
Tasks
2. Your company uses the product, and they've just purchased a new one for another lunchroom. You'll assist the technician during the installation. Could you figure out how you would start the installation process in the app?
‍
3. You logged in to the app on your friend's phone last week. You noticed that you've forgotten to log out. How would you find out what devices you are logged in?

4. You use the product in your home, and your friend Carolyn is visiting you. You won't be at home when she arrives. So, you want to share a pass (digital key) with her. How would you do that through the app?
Key findings
Participant
Share/create a pass

"Identifying the fact that the owner's pass allowed me to generate other passes to somebody else is difficult."

Determine the problems
Nielsen's Heuristics
I determined the problems with content and UX audit. The outcomes were like below:
Pros
Cons 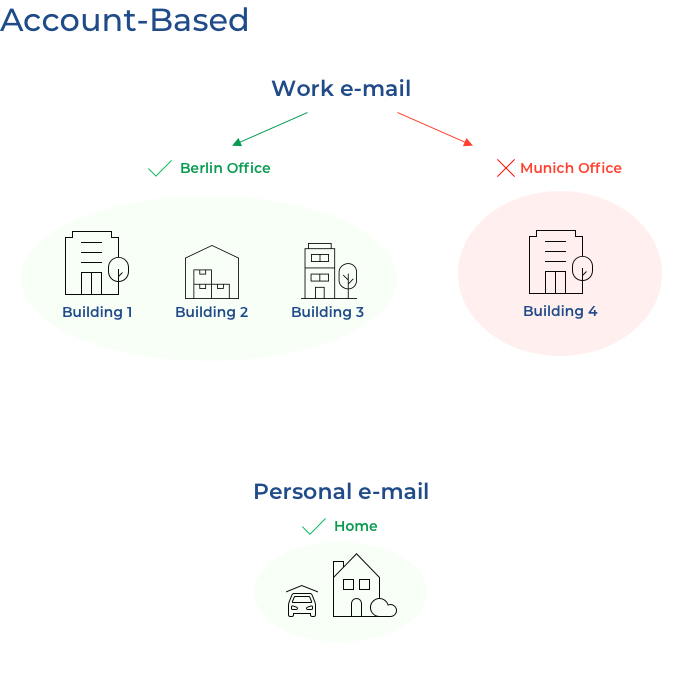 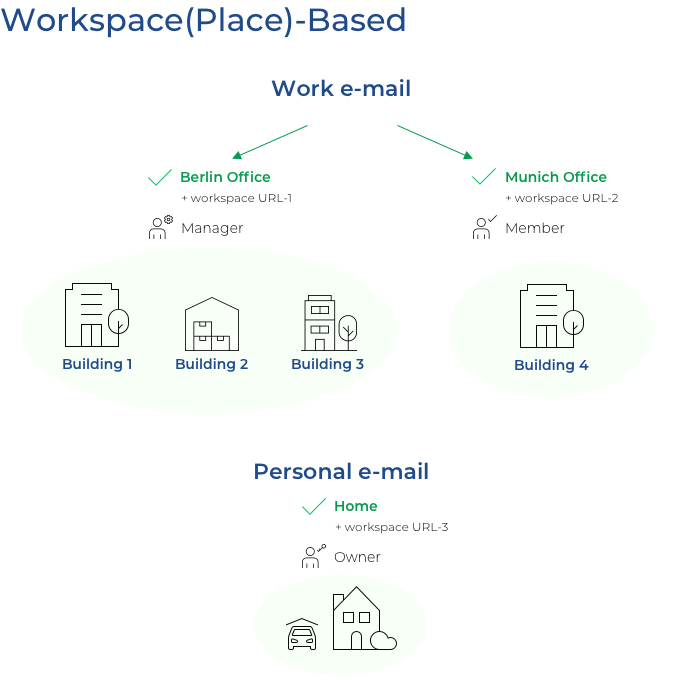 Icons designed by attoma Berlin.
After
The information architecture had a direct effect on users and software architecture. So, I improved the information architecture in collaboration with the software development teams. We changed the structure from account-based to workspace-based. So unlike the previous structure, we provide the user can have multiple accounts with the same email address in a different workspace (Place). For example, an employee can create multiple accounts to access the other branches of his/her company with the same work email. In that way, the employee can log in to the Berlin and Munich offices with the same email but different accounts; the passes are automatically filtered based on the logged-in Place, the user can have different roles (member, manager, etc.) in each Place. 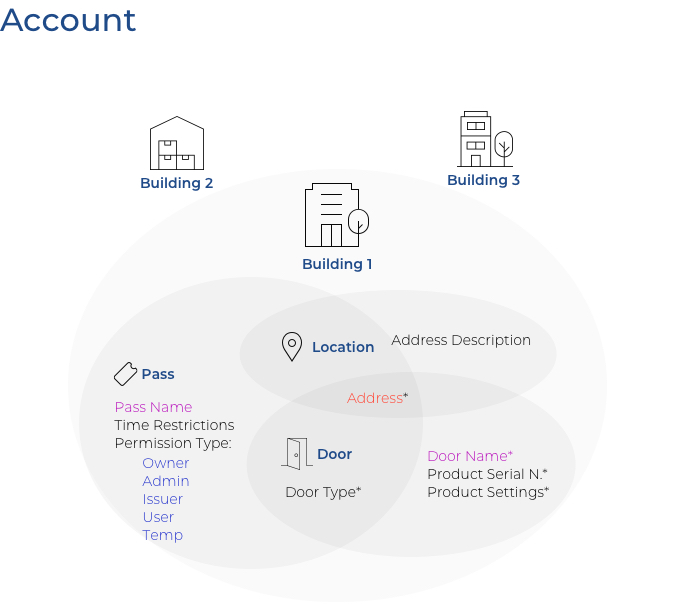 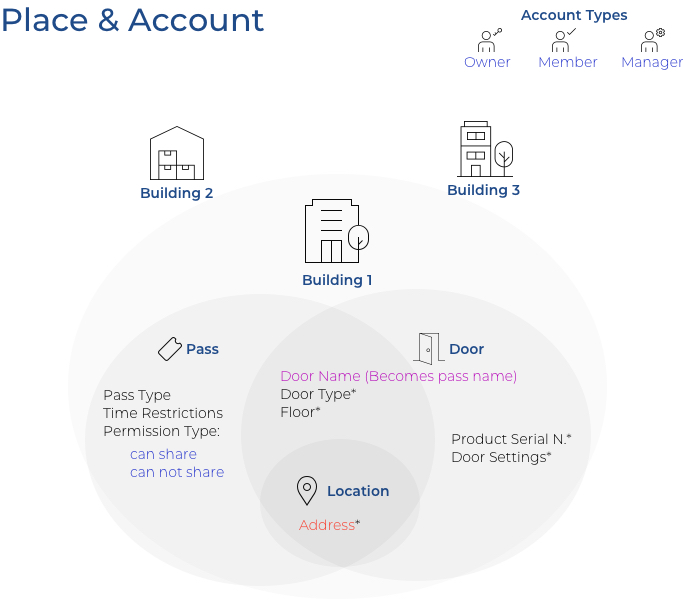 After
Collect data
Open Card Sorting Study
I conducted an open card sorting study. So, the users were free to assign whatever names they want to the groups they've created with the cards in the stack. In that way, I could also discover if they call any feature differently. I could conduct it with five participants because of time limitations. The number of participants should be around fifteen/twenty, according to Nielsen Norman group. That's why I just used the input as a base (to be validated later) for guiding me.
‍
I paid attention not to use terms on the cards that bias participants. For example, I haven't used the name "pass". Instead of saying "create a pass"; I said "giving access to someone for opening a door." You can find below the cards categorized by the participants during the card sorting research:

New information architecture
Site map
I created the new sitemap for the app and desktop app based on my findings. 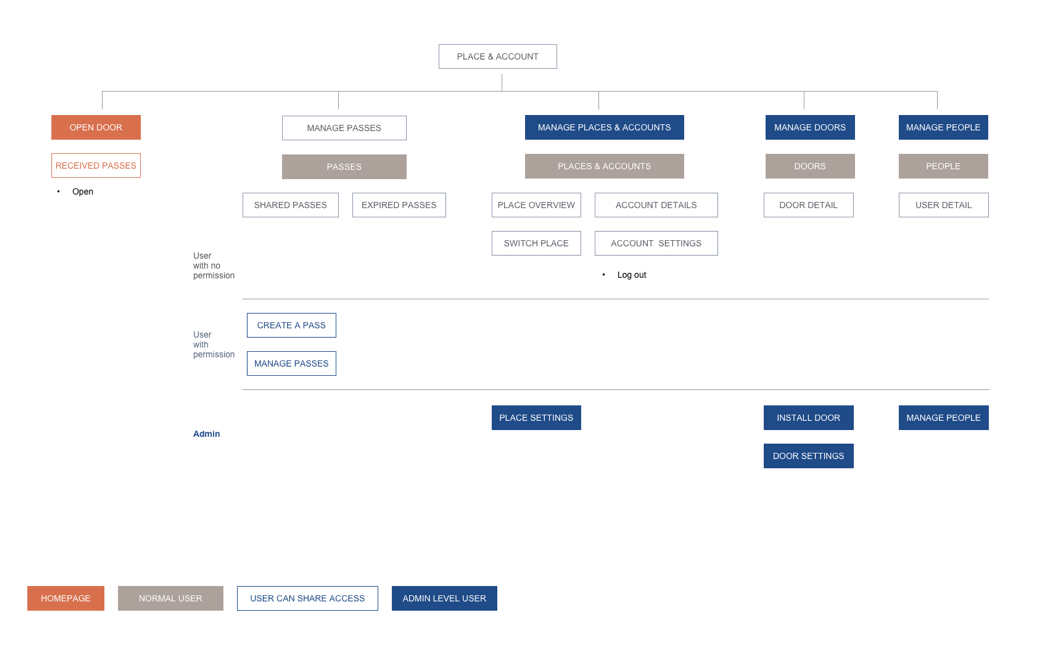 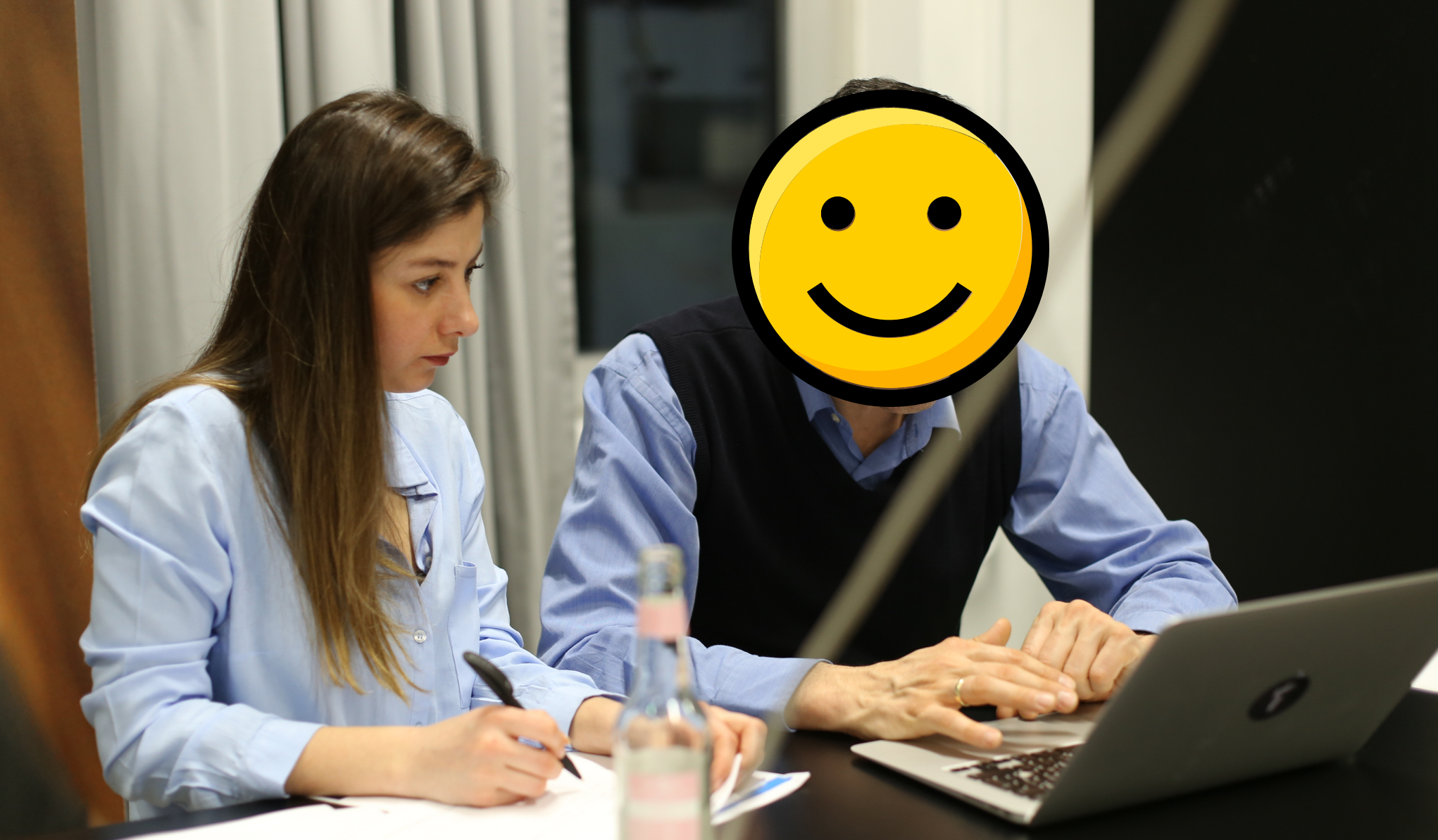 Validation
Guerilla User Testing
After implementing the solutions to the prototype, I conducted user testing for validation.
Discoverable pass creation
Lostness Score
While observing the participants’ performance, I’ve also assessed if they feel lost on their path to success by using a “lostness score”. The lostness score measure is the user's ability to find a specific information.
‍
The metric itself is pretty simple as it ranges from zero to one. A high score of lostness means users are having trouble finding what they want. A low score means the opposite, that they are able to find what they want with relative ease. Anything under 0.4 indicates that there are not lost and anything over indicates that they’re lost.
Before
Legacy App
After
Prototype
Next steps
The next steps are to gather customer feedback by implementing analysis and tracking tools to the app, follow app store reviews, and interview with the customers for validating the design and improving the user experience.

Improve the navigation: from the sidebar to bottom navigation 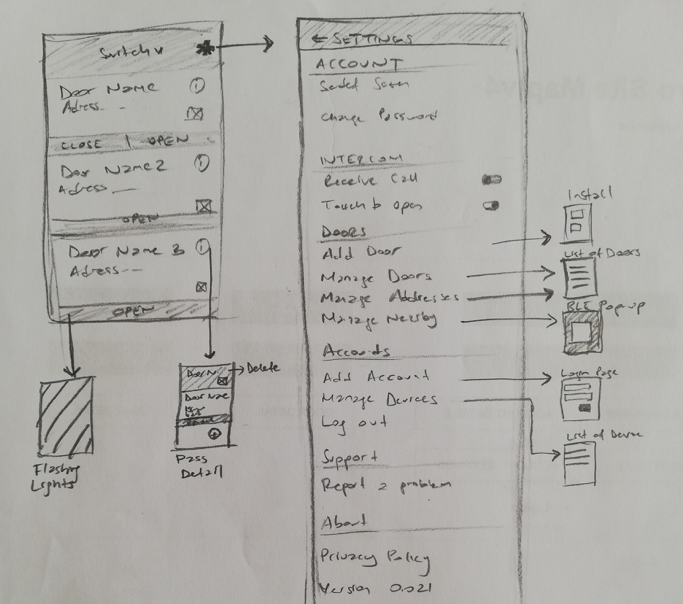 Before
The navigation menu was a long list under the sidebar. So, the user puts effort into discovering how to install a new door, share a pass, or log out from other logged-in devices. 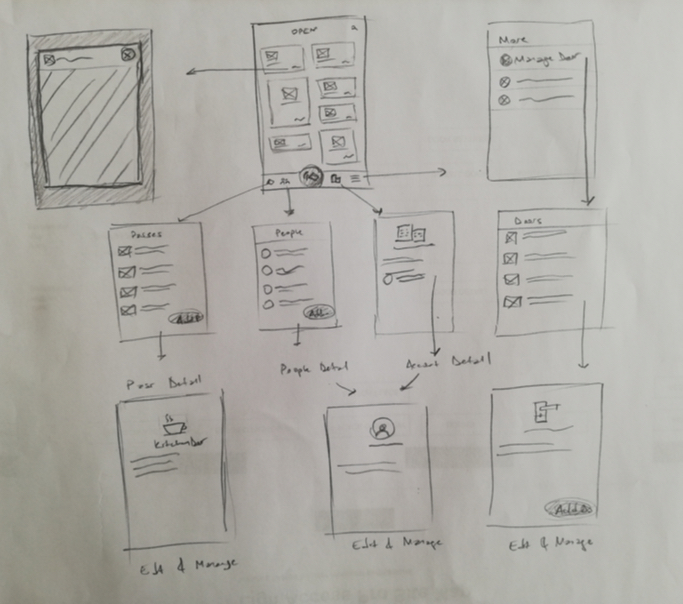 Consistent patterns
I created a consistent pattern library for management features: to manage doors, accounts and the passes. So, the user can access to the main feature through the "Manage Doors" page. He/she can starts door installation wizard through "Install Door" floating action button.

UIs are designed in collaboration with attoma Berlin.
Implementation
As I mentioned above, I created and implemented the consistent pattern library into the "Manage Doors" page.

We defined technical requirements for managing a door in collaboration with the Embedded development team. The user had to connect his/her phone to Bluetooth to be able to display the Door Settings and the Firmware version. In that way, the phone could communicate to the device mounted on the wall/door, and show the updated information. So, I added the screens for Bluetooth connection for guiding the user before managing these features.

UIs are designed in collaboration with attoma Berlin.
Implementation 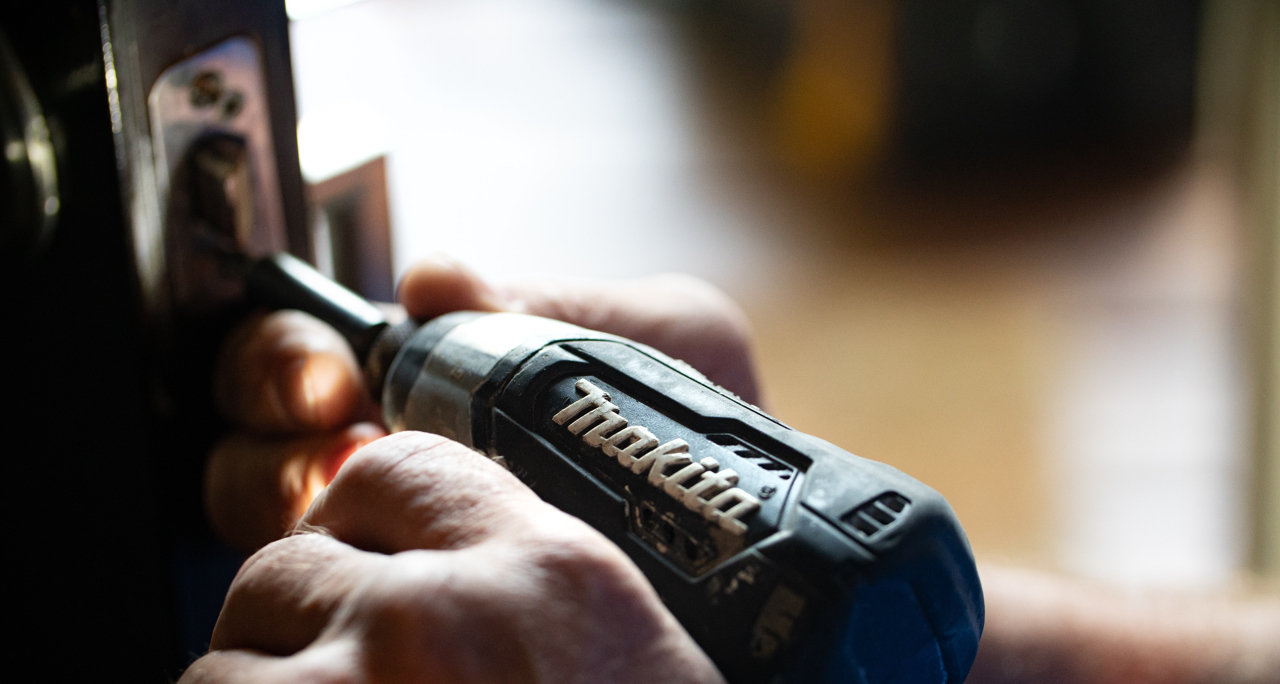 Photo by Theme Photos on Unsplash
User & Business Goals
The user's goal was to install a door smoothly and operationalize the product; the business goal was to have more self-sufficient customers to relax the technical support and costs.
Challenge
The door installation process has to be done through the mobile app, has many steps, requires some basic technical knowledge, and includes many inputs from the customer. In addition to that, a new product of ours was ready for the market, which requires the Bluetooth connection during the installation. The challenge was to merge all of the steps in a logical way that provides a natural user experience and incorporates technical-time limitations. 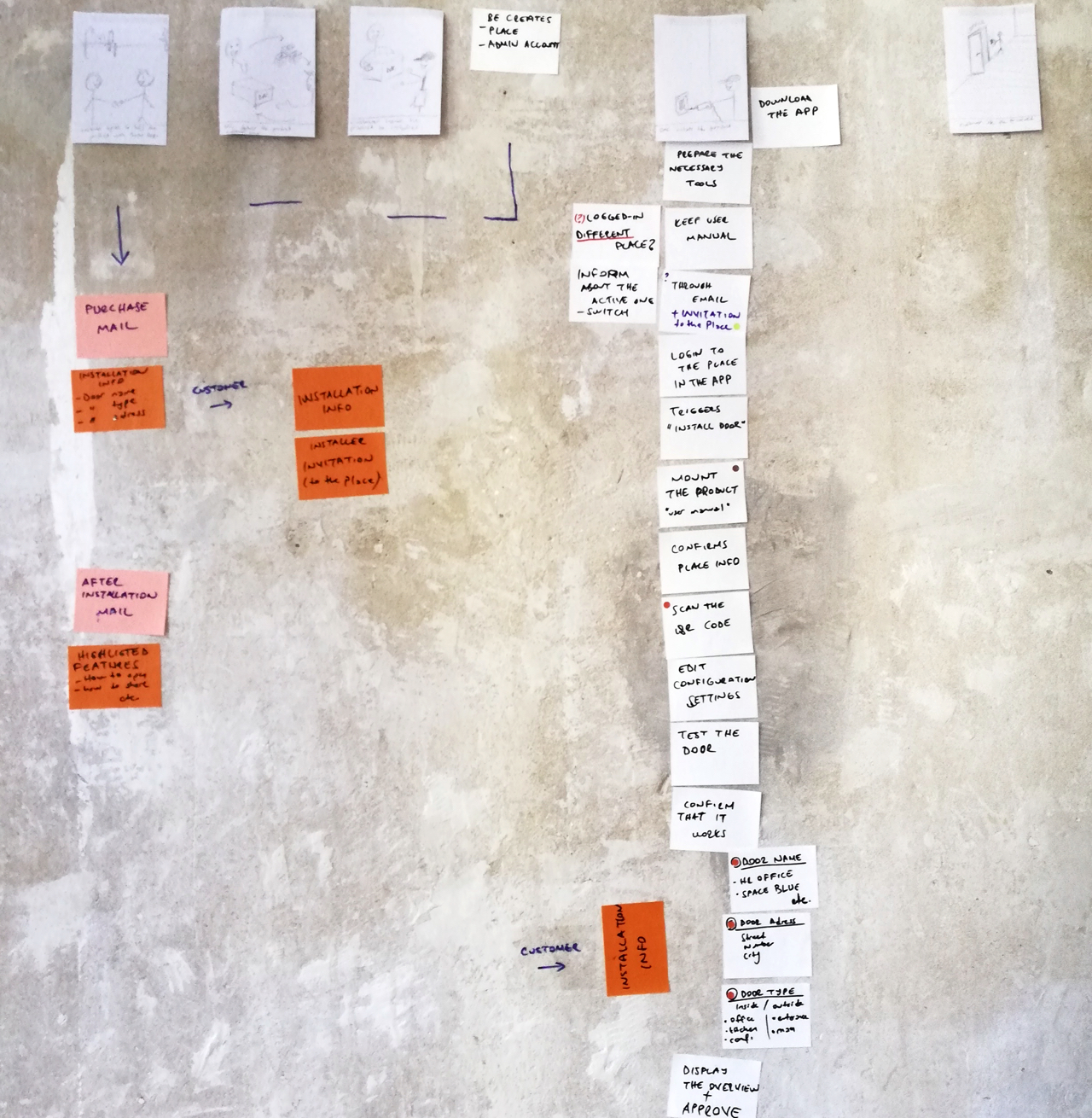 Clarify the user activities
User Story Mapping
I followed the User Story Mapping methodology to clarify user activities and tasks(stories) with other team members. The reason for using this methodology was to share understanding with all team members, catch technical barriers while advising the design solutions. In that way, we eliminated many possible solutions due to technical or time limitations. At the end of the session, it was clear which path the user (and me) can take. 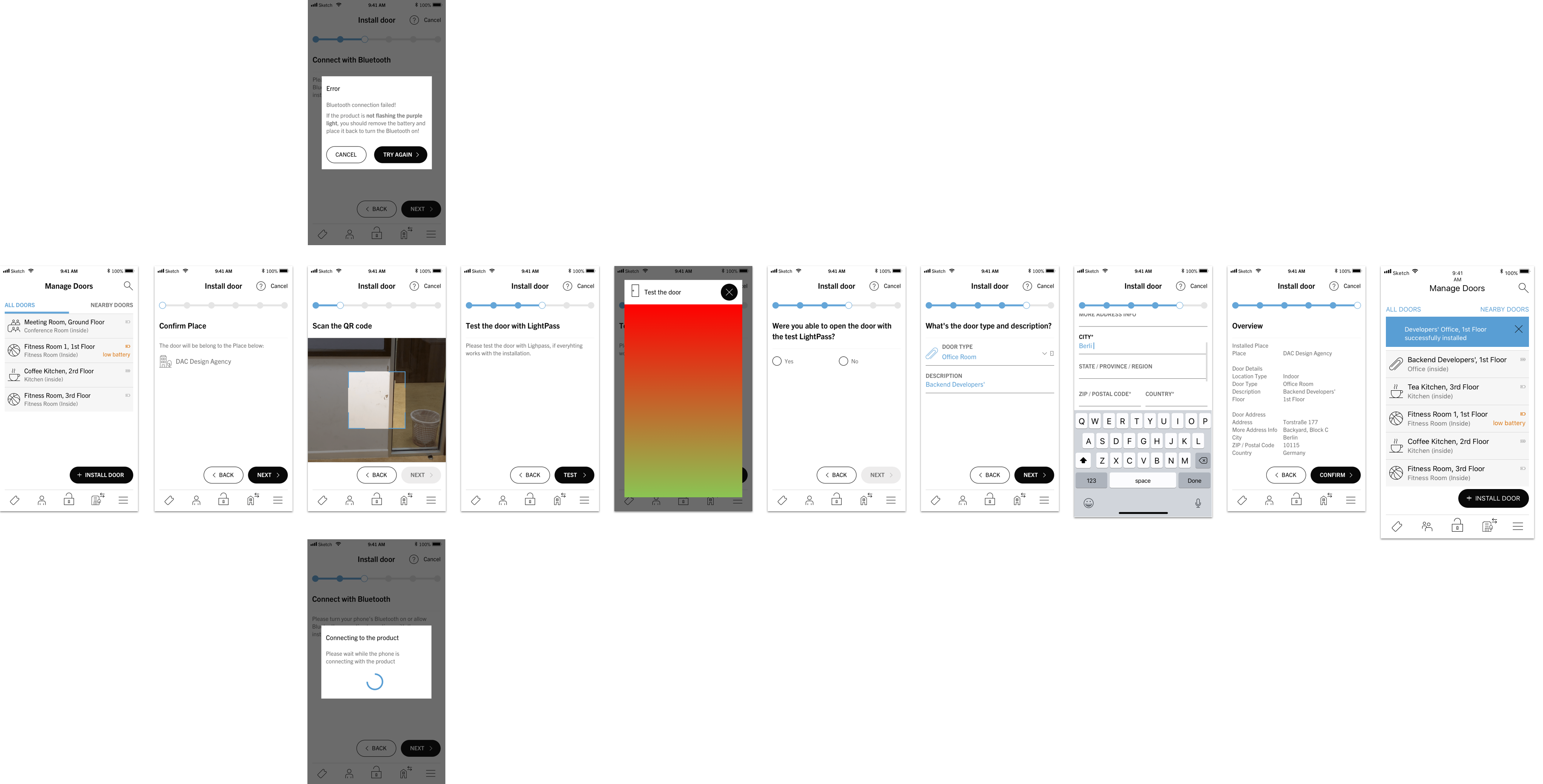